Al and His Planes

One of the most surreal things about photography is the kind of people you meet. I’m not talking about the clients (thankful as we are for them). I’m talking about the people we end up running into during our scouts when we go out looking for locations. One of our recent grooms briefly mentioned that he would love an eShoot around the planes. He wasn’t adamant about it. He just mentioned and my head started swimming with the types of shots we could take, and where we could do such a shoot. So after a couple of solid hours spent on the Internet, I got in the car and drove about an hour and a half to go see Al. I didn’t know I’d be meeting Al. I just thought I’d go check out the place and maybe talk to someone about the possibility of doing a shoot. See this place wasn’t an airport or a museum. It was actually someone’s private property. Property owned by Al as I found out after I pulled up my car next to a shelter and met this guy who looked like a pilot. Just something about his face and the way his hair were scrunched in from where a helmet would be. Come to think of it could be a biker too. Oh well. Anyways he told me to go to this other cabin.

So I walked on over and just as I reached the door, before I could knock, I heard this raspy voice.

His voice was neither rude nor inviting. I opened the door and stepped in. I looked around and saw chairs made out of small plane seats, old radio controls, and other pearl harbor type things. There was no computer or any other modern equipment in sight. The place had character alright,

“Well, what are you looking for?”

as did Al. He spoke while holding the phone that also looked like a movie prop. I can only hope the thing was working. I introduced myself as a photographer and told him I was interested in doing some engagement pictures on his property, and wondered how did one go about getting permits and stuff?

“No. And I’ll tell you why!”, he said before I could finish.

“Yeah, I’ll call you tonight!”, he said and put his phone on the cradle. Yes, the phone had a cradle.

He then looked at me and said. “Yes so the answer is no. And I’ll tell you why! Because they came before and I let them in. And I asked them what the pictures are for and they said it’s for personal keepsake. And I was ok with that. And then more and more people started coming. And I asked them where did you hear about it? And they said they saw it on YouTube. They lied to me. They said it was for personal reasons. And so now I’m not ok with it. So no you can’t take pictures here because people who came before you fucked it up and now I don’t want any more of that”.

“Right. I understand, but I’m telling you openly that this is not for personal reasons. I’m a wedding photographer and this is for my client.”

“It won’t be on YouTube but what’s wrong with that?”

“Well you could give permits for shooting, and charge for it ”

“I don’t care. I don’t care about the money. I’ve been collecting these planes since 1986. And I don’t want them to show up on YouTube. And then I got google earth people calling me up. I don’t want nothing of that”.

He softened a bit.

“Well thank you for asking me properly. I appreciate it. But these people who came before you ended up going in the fields where they were not supposed to and it’s a mess. Sorry if I sound pissed off but that’s because I am pissed off and I want none of that anymore.”

And so we walked out of his office, said goodbyes, got in our cars and left. The last I saw of Al was through my rearview mirror as he sped off on a snowy off road.

I wasn’t upset. That I came all this way and nothing came off it. Or that he had spoken to me in not exactly friendly tones. If anything, he had this old world charm about him. The whole place had a feeling of a hidden treasure. It was just surreal. I was glad I had been there.

But I was unsettled. I wasn’t sure of what exactly. Partly, I couldn’t figure out what Al was so upset about? He told me that he’d been collecting this stuff since the 80s. And if you nurse a passion for that long, don’t you want people to know about it? He didn’t say that people came here and damaged his property or left it a mess, or anything like that. He was just upset about the fact that people had seen his treasure and then gone out and told other people, who were now coming to see it. It reminded me of this Dicaprio movie, The Beach. And I guess what unsettled me the most is the time and effort Al must have spent collecting these planes. He owns a slice of history and he doesn’t want to share it? How can that be? I mean I don’t even know a thing about planes, and I couldn’t tell a propelleramabob from a wingamagig, but it didn’t exactly take a genius to realize that underneath all these dead planes and parts were amazingly rich stories. Stories that Al was willing to let die. And in this day and age of Jersey Shore, formula driven music, senseless movie plots, and everything that is fake, these planes, their stories and Al are the real deal. 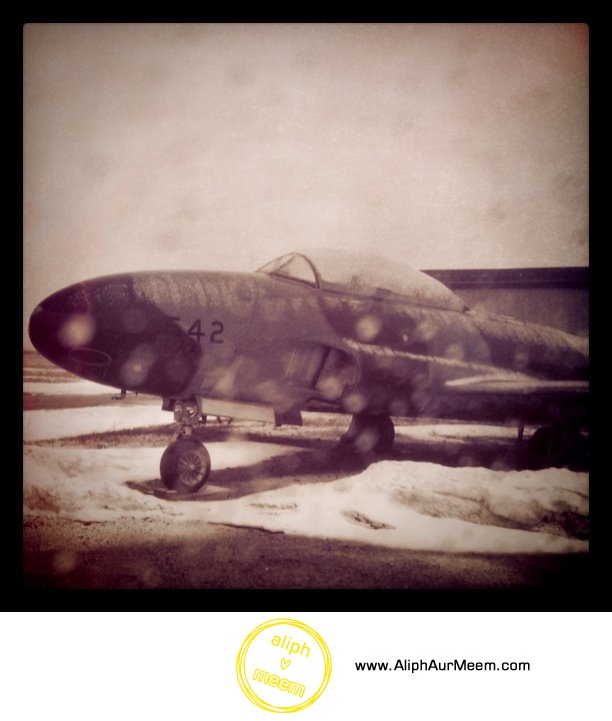 I managed to get this shot from inside my car before leaving.